Had a fair amount of snow here this winter, not ever an accumulation over a few inches, but it has snowed fairly often. And gotten quite cold, not into the twenties many days, I think I even had a day or two with a wind chill below zero- which is something for me, so if you are in Minnesota, don't laugh! Having not been here but a year and a half, I can't say whether it is very normal for here. Then again, it probably isn't, since climate change has insured no one gets the weather quite as expected.

The parrots do not seem to mind the winter if you ignore the fact they do not get outside that often. I do not keep my house that warm in the winter, and even the "free as air" (ehem) set in their brief feather attire have not shown any sign of caring. The only ones that do have a problem is the ekkies, and that seems to be related to how dry it is rather than the temperature. It is hard every year when the plucking gets worse, not that I can blame them. My lungs do not care for really dry air either. I hang wet towels and boil water for moisture, but really need to look into a new humidifier, since the plastic-whatever used to make my old one has broken down over the years and I am now not entirely sure of how safe it is now. I wonder if anyone makes a glass/metal one???? 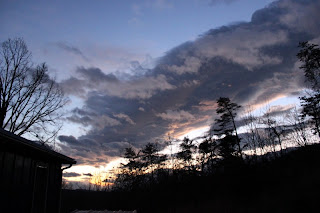 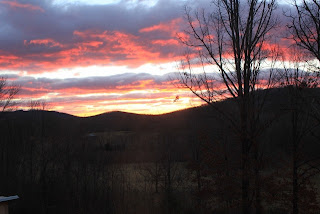 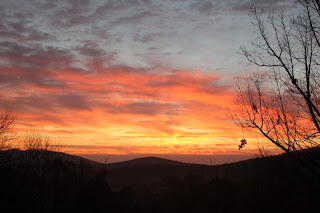 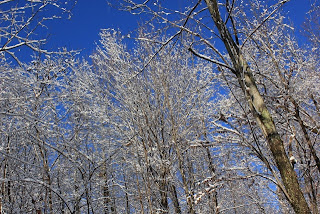 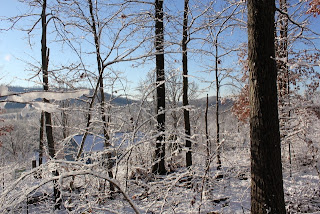 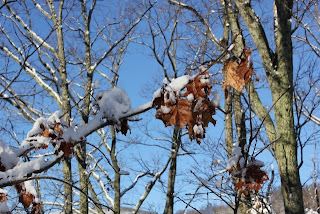 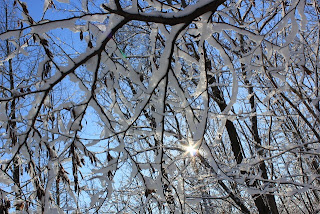 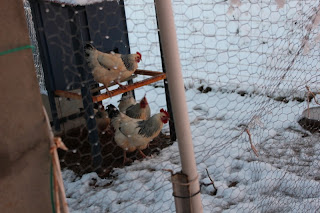 Chester- the Good, the Bad, the Unknown 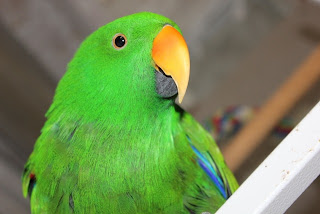 Awww, Chester on a good day. My little buddy!

Chester is my little buddy. So sweet, so empathetic, rather cautious but always eager to see what's up and hang out with me. On the other hand, sometimes Chester has bad days. Days were he does not wish to cooperative on any level, and should he actually decide to, say, step-up, you should put him down as soon as possible. From experience, I can safely say he will NOT be satisfied on your hand for much longer than 3.5 seconds. His Maori yell, as I call it, is usually used extensively during these days, most often accompanied by beak charging and/or banging. Sometimes these bad days last for weeks or even a month or two. Sometimes not. Hard to say. 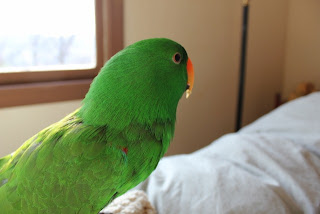 I would like to point out, though, that both of my ekkies are extremely polite about biting. Chester screams, beak bangs, even beak bangs with his beak open, and occasionally does a quick dose of beak pressure, but I have only once, ONCE! ever been actually bitten. That would be the day Clementine came home. Clearly  he knew something was up, though he obviously had not been anyway near her at that point- and I have to wonder is he thinks he overreacted, since he is know friends with her. Anyway. Chester really amazes me with how polite he is. If he does not want you, he will lean so far back he hangs upside down from his perch, or fly off with such force and speed he inevitably rams into something (not good), but he just does not favor biting. 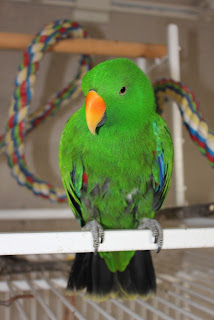 I am not complaining- who likes being bitten? As is only polite on my part, I do my best to avoid irritating him any further than he already is with..... well, whatever it is that irritates him during these times. This means during his bad days I may never pick him up (though I always give the option), instead I just offer the occasionally treat (sometimes even that he does not want) and open his cage door so he can come out to play on his cage if he so chooses. Talk to him, but not too close. Just let him be, and give him what I can. 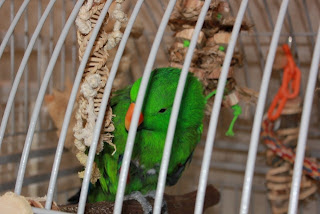 When Chester is having a good day, he can be very sweet. Not to everyone, but to me and a few other select people he has learned over time to trust. After many weeks of not sweet, he has become sweet again this December. I am thinking of it as an early Christmas gift. So nice to have back my friendly feathered beaver! And as a last note, speaking of feathers: his improve each year- month by month there are ups and downs, but year by year they are better and better. He is quite green now, and I am still holding out hope for a fully green boy in the future, at least for part of the year. Already many of these pictures look fully green, since it his just his lower belly where down still shows. So he is what I call "Facebook fully-feathered." And that is better than nothing! 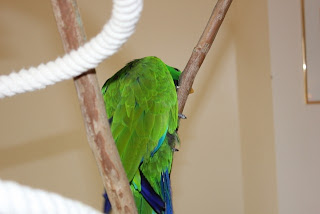 Chester: a bird with a mission.
To the top! 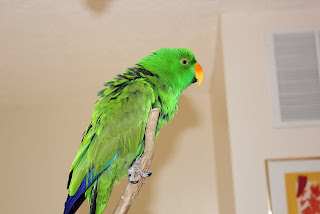 The view! Ah, the view!
Such a lovely place to fluff and relax.
My work is done. 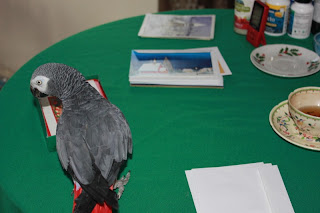 Guess who you should not ask to help
with Christmas cards?

Clementine is doing very well, now a year since I adopted her. Her diet was about average when I got her, but she has slowly become a much better eater, not just with new foods but with new ways of preparing them and, therefore, new food textures. She no longer shuns mushy food, which has greatly increased her sweet potato, cooked mash, and squash intake! She was fairly well adjusted when I got her, and has remained so. Very rarely, or rather never, is she in a bad mood, and shows her age less than Lola and Miss Patty. Yes, she has some joint inflammation and a bit of plucking under one of her wings, but quite good really. All in all, Clementine is still just as fabulous as ever. My sanity, eh, not so much. Clementine is a talented mimic. Really talented. So talented, in fact, that she has become my resident household ghost. 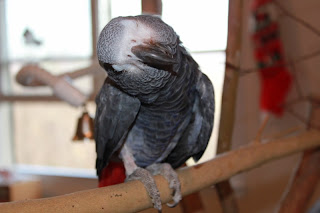 In general, she leaves actual talking to the other parrots. No, Clementine specializes in those subtle noises that generally accompany having someone else in the house- distance voices that are incredibly realistic, cars driving up, doors creaking, even people walking around. She will do this if you are standing next to her, or if you are in the next room or upstairs, so she is certainly not a closet talker  She just has a deep appreciate for the subtle. One that might, in fact, drive me insane as I check the door for the 5th time thinking it is Gwen whining to come in. Or jump once again when she uses her most human of voices at a moment you are least expecting. I think she likes making me jump. She must. Because while I cannot fully describe why her ghost talking is so much more, well, rattling, than any of my other parrots- trust me, it is. And she practices a lot. So she is only getting better. 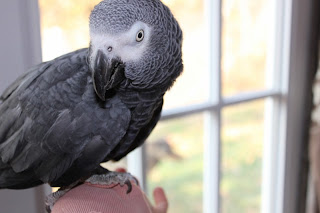 Really, what was wrong with a simple, loud and clear, hello? Or the telephone ringing? Or even the dogs barking,as Alasdair is doing outside in the above picture. Nice, loud, simple noises. Conversations like frank. Basic stuff. 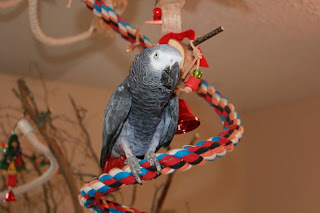 Jokes aside, to (for once) be perfectly honest, Clementine's noises get very little reaction from me, hardly any, aside from the door checking, which rarely works any more. They do make me notice, but usually when I am not in the room, and only because of how good they are, rather than because I think robbers have actually broken into the basement- my dogs are way to bark happy to miss an event like that, it is all they live for, that and dinner anyway. And I do not think looking up from my knitting counts as enough of a reaction, either. So I think she has just developed a fascination with sounding as good as she can for her own interest, rather than mine. Although it does thoroughly confuse the occasional guest I get, which is very frustrating for them, not being as sedate as I am when it comes to odd noises from parrots. But then, I enjoy that quite a bit too, so I guess we are just both terrible. 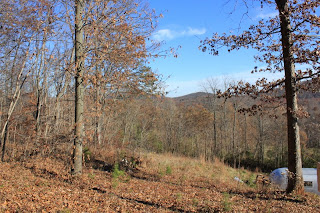 The chickens are grateful for the compost.
Accidentally got them in this photo, but you have to look hard.
(lower middle-left, bits of white)
(ok, so they are hidden well- does not change their love for compost!) If you visit, Kipperkites will steal your stuff
(like the hat she is on) for her naps.
She will pretty much ignore you otherwise.
Except to try and steal your food if she is awake. The dogs can only nap after you leave, though.
They are always so excited to have new people.
You would think I just ignored them all the time,
for how excited they are over guests.
It leaves them exhausted when the guests depart.